How important is hydration? 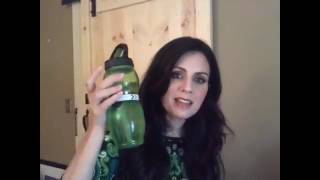 What is the Most Abundant Mineral in Your Body?

The American Heart Association recently came out with a study that shows how dangerous the consumption of energy drinks can be. While the FDA considers safe doses of caffeine to be 400mg or less, energy drinks contain more than just caffeine. They also contain a proprietary blend of other energy ingredients and chemicals.

In a study done with young participants, divided in to 2 groups - one drinking 32 ounces of a commercially available energy drink with 320mg of caffeine and the other drinking a carbonated water beverage with 320 mg of caffeine - researchers found that the group who drank the energy drink had higher blood pressure after 6 hours.

When my kids were younger, I watched their friends drink Red Bull and Rockstar drinks before sporting games and events. It made me cringe thinking about the effects of those drinks on their young bodies and minds.

In addition to raising blood pressure and speeding up heart rates, energy drinks also contain loads of sugar. In fact, one can could contain up to 50 grams of sugar, promoting weight gain, tooth decay, and high blood glucose. This level exceeds the maximum amount of sugar that both men and women should consume in one day and could promote an unhealthy risk for diabetes.

Energy drinks also cause dehydration, especially because some people choose to drink them in place of water or electrolyte-rich drinks. The high amounts of caffeine, a natural diuretic, and the other energy ingredients are dehydrating, especially during warm months and exercise. Young athletes as well as older athletes or anyone involved in physical activity and exercise, need water in order to optimally function.

More articles on the negative effects of energy drinks can be found here.